RUNAWAY TRAIN – 2005 Eddy McManus’ true power-ballad tribute to a great song.  Soul Asylum had a runaway hit with this release in 1993.  It won a Grammy Award for Best Rock Song in 1994!  Eddy fell in love with it and had to record it.

Wiki:”Runaway Train” is a power ballad about children that ran away by American rock band Soul Asylum. It was released in June 1993 as the fourth single from their 1992 album, Grave Dancers Union and became a success around the world. In mid 1993, it reached number five on the Billboard Hot 100, number two on the U.S. Top 40 mainstream and climbed to the top position on the Canadian RPM Top Singles chart.  It was certified gold by the Recording Industry Association of America and sold 600,000 copies in the United States. Worldwide, the song was highly successful, reaching number two in New Zealand, Norway, Sweden, and Switzerland, and peaking within the top five of several other European countries.   The song helped bring their album, Grave Dancers Union, to a multi-platinum level and won a Grammy Award for Best Rock Song in 1994. 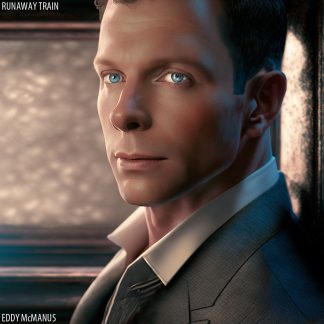